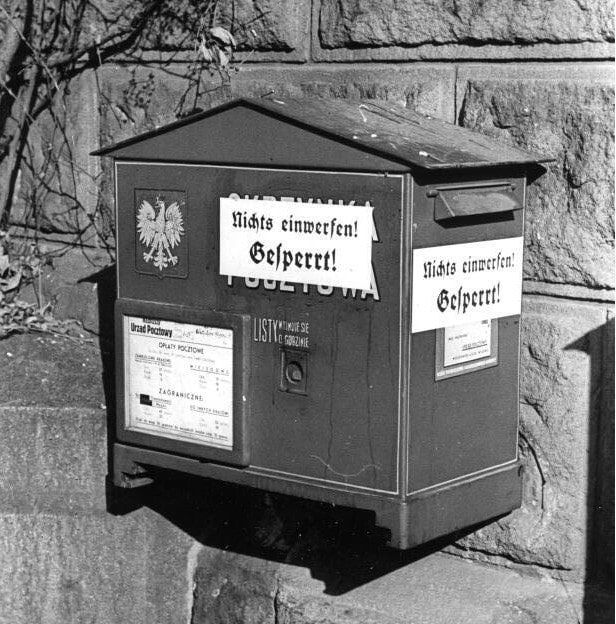 A former Polish postbox in Poznań with a German sign ‘Not in service’, October 1939. Denunciations were often sent by letter to the Gestapo and Nazi authorities. Photo courtesy of the German Federal Archives

Under the Nazi dictatorship, the ‘good citizen’ was tasked with watching, listening, and sharing information with authorities as a means of political and social control that was crucial to the establishment and stabilization of the regime from 1933. Denunciation case files thus reveal insights into forms of grassroots surveillance and intimidation that were instrumentalized by the Gestapo.

The PMJ volumes contain denunciation letters and reports that reveal a range of motives among informers, from antisemitism to self-interest. Violations of laws designed to isolate and persecute Jews feature prominently. The documents also provide examples of informers targeting Germans who were not deemed by the regime to be ‘racial outsiders’ and show how high-ranking Nazi officials sometimes sought to overlook past infractions that had come to light through denunciations.

Sample documents
Volume 1  –  document 63
On 18 July 1933 scientists at the Potsdam Observatory denounce their colleague Professor Erwin Finlay Freundlich as an ‘anti-nationalist descendant of Jews’
‘I have in my possession recent information that Mr Freundlich made remarks about the Führer of the National Socialist Movement which must deeply outrage every German Volksgenosse.’
View document
Volume 1  –  document 104
On 13 February 1934 the hotelier Hanns Kilian complains to the municipality of Garmisch about the denunciation of an Austrian performer as a Jew
‘The performer did not behave – as alleged by the writer of the letter – in any way that was offensive or brash. Dr Vollkommer probably mistook her Viennese accent for Jewish jargon.’
View document
Volume 3  –  document 10
On the basis of a denunciation, on 13 September 1939 the Munich Gestapo accuses Felizi Weill of inciting hatred against the German state leadership
‘The Jewess Weill is alleged to have said: ‘Now there’s another war coming. If they bomb us, there’ll be nothing left of Munich after four weeks. Let’s hope we’re still around to see all the high-ups snuff it.’’
View document
Volume 3  –  document 58
On 12 March 1940 Charlotte Wollermann from Düsseldorf denounces the Protestant pastor Gottfried Hötzel for having given a pro-Jewish sermon
‘Pastor Hötzel essentially said the following: ‘It is not the Jews who are the children of Satan, but those who are persecuting the Jews.’’
View document
Volume 5  –  document 103
On 21 November 1941 Henricus van den Akker reports Hugo Kruyne to the German authorities for being a Jew and continuing to work in the civil service
‘I have heard it is forbidden for people of Jewish descent to work in the civil service, and now I recently heard about a case where such a person has received a permanent position in the civil service with increased pay applied retroactively from June onwards.’
View document
Volume 2  –  document 235
At Hermann Göring’s request, on 10 January 1939 the Reich Minister of the Interior stipulates that no one be denounced on account of having previous contact with Jews
‘The spying on and denouncing of such cases that are often long past creates a situation that is disagreeable from every angle.’
View document
Don’t stop!
Keep reading by purchasing a PMJ volume for complete access to all the documents.
Purchase a volume
Explore more