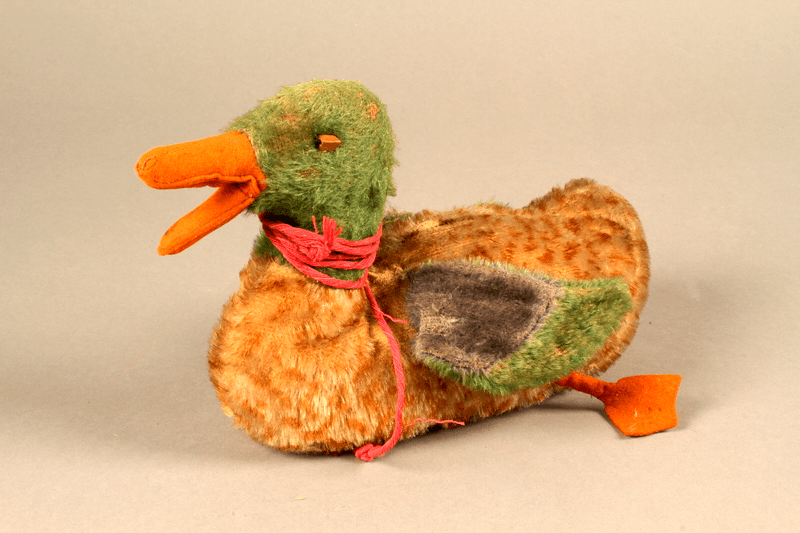 A toy duck that belonged to Diana Kurz, who fled with her parents to Britain from annexed Austria in 1938 before later immigrating to the United States. Photo credit: United States Holocaust Memorial Museum Collection, gift of Diana Kurz

Jewish children were among the Nazis’ most vulnerable victims. For many such victims, their persecution began before they were able to fully grasp the perils they faced and take action based on informed decisions. As a result, children often had to rely on decisions taken for them by guardians or organizations established to help them flee to safety. Countless children perished in the Holocaust.

The documents made available here detail what life was like for children in the German Reich in the early years of the Nazi regime. They also illustrate the various efforts to help child refugees reach Britain through the Kindertransport or get to safety elsewhere with the assistance of aid committees in places such as occupied Belgium and France.

Sample documents
Volume 1  –  document 196
On 10 September 1935 the German News Agency comments on the decree of Reich Minister Bernhard Rust ordering the creation of separate schools for Jewish children
‘The new decree aspires to implement a total separation of races in the primary schools, regardless of the religious affiliation of the racially foreign Jewish pupils.’
View document
Volume 2  –  document 202
On 11 December 1938 Ruth Maier of Vienna describes bidding farewell to her sister, who is travelling to Britain on a Kindertransport
‘Dita is gone. She is on the train now, right now, at this moment. She is laughing, unpacking her food, or maybe she is feeling homesick.’
View document
Volume 2  –  document 213
On 25 December 1938 youngsters from a Kindertransport report on their reception in Britain
‘We are not bored, but we prefer to show our gratitude to the English through useful activity and to learn something ourselves in the process.’
View document
Volume 2  –  document 226
In 1938 Irmgard Keun describes the emigration experiences of Jews from a child’s perspective
‘What’s the point in growing up when it only makes you sad?’
View document
Volume 2  –  document 288
On 2 June 1939 the Brussels-based Aid Committee for Jewish Refugee Children asks the Israelite Religious Community of Vienna for support with the organization of the Kindertransport
‘The German authorities do not permit either children or adults to take money, jewellery, silver, gold, etc. with them. Should we find any other valuables while unpacking here, the children will be sent back on the next train!’
View document
Volume 5  –  document 152
Edith Goldapper describes her flight from Belgium to France in May 1940
‘We are going somewhere or other, into the unknown, no idea to what country!’
View document
Volume 5  –  document 153
On 16 July 1940 Marguerite Goldschmidt-Brodsky asks the American Jewish Joint Distribution Committee to help Jewish refugee children from Belgium
‘Do not abandon these children, I implore you.’
View document
Volume 5  –  document 284
In September 1941 the children’s aid organization Union OSE reports on its activities for the months of June, July, and August
‘The series of tragic cases encountered during the last quarter has continued, and we have often been obliged to admit to our homes on an emergency basis children whom our welfare service has picked up practically in the streets.’
View document
Don’t stop!
Keep reading by purchasing a PMJ volume for complete access to all the documents.
Purchase a volume
Explore more