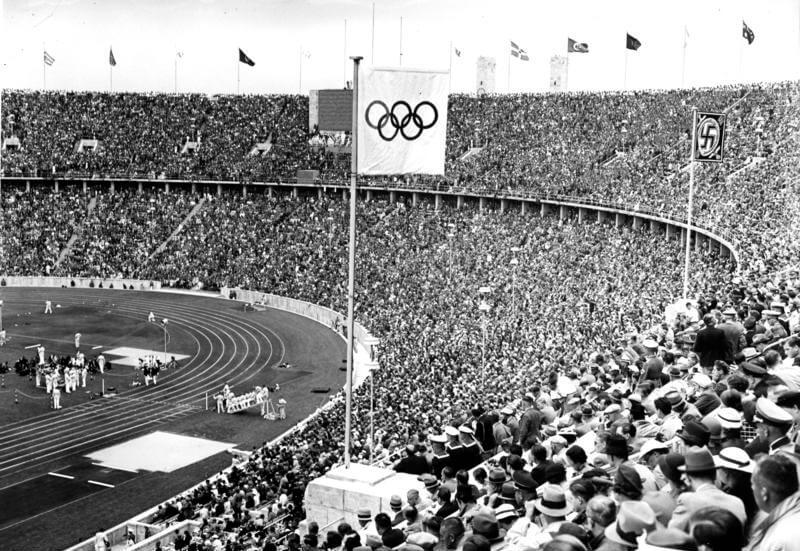 The Olympic Stadium in Berlin during the Summer Olympic Games in 1936. Photo credit: German Federal Archives, B 145 Bild-P017073; licensed under CC-BY-SA 3.0

Three years after seizing power, the Nazi regime capitalized on the International Olympic Committee’s 1931 decision to designate Berlin as the host of the 1936 Summer Olympic Games. Although the persecution of Jews and other ‘enemies of the state’ by the dictatorship had prompted international calls for a boycott, none materialized. In a propaganda coup, the regime was able to shape Nazism’s image on an international stage and present a ‘peaceful’ Germany to the world. A New York Times reporter even claimed that the Games had put Germany ‘back in the fold of nations’.

The selected documents from the PMJ volumes reveal steps taken by the NSDAP to present a sanitized version of Hitler’s Germany to international guests, as well as a return to discriminatory practices after the Games, once the attention of the international community had waned.

Sample documents
Volume 1  –  document 244
On 4 February 1936 the Regierungspräsident in Potsdam informs Gauleiter Wilhelm Kube of his planned circular directive concerning the Jewish question
‘On account of the Olympic Games, proper handling of the Jewish question acquires the utmost significance. Putting up signs with alarming contents, such as ‘Entry here is life-threatening for Jews’, must be avoided for reasons of politeness to Germany’s guests alone.’
View document
Volume 1  –  document 235
Pariser Tageszeitung, 23 June 1936: article about conditions for the German Jews shortly before the Olympic Games in Berlin
‘In light of the upcoming Olympic Games the press in Germany was directed to refrain from reporting much on the anti-Jewish movement within the Party and the anti-Jewish measures taken by the authorities.’
View document
Volume 1  –  document 238
On 16 July 1936 the Reich Circle for Propaganda and Public Enlightenment issues recommendations for the conduct of the SA towards foreigners and Jews during the Olympic Games
‘During the Olympic Games, we want to prove to the rest of the world that the persecution of Jews being part of Germany’s agenda is a lie.’
View document
Volume 1  –  document 244
On 30 August 1936 State Secretary Hans Pfundtner complains to the Bavarian Minister President about Jewish spa guests in Bad Kissingen
‘For years I haven’t seen so many Jews together in one place as there are here right now in Kissingen. The town and spa administration really do have to do something about this, especially as the Olympic Games are now over.’
View document
Don’t stop!
Keep reading by purchasing a PMJ volume for complete access to all the documents.
Purchase a volume
Explore more