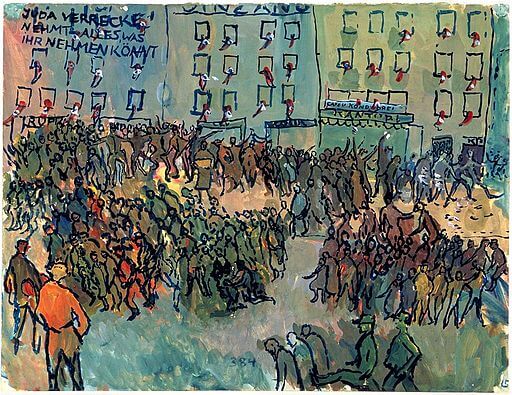 Gouache depicting violence during the Night of Broken Glass as painted by German-Jewish artist Charlotte Salomon. The caption states ‘Death to Jews! Take everything you can’. Image courtesy of the Jewish Historical Museum © Charlotte Salomon Foundation

In response to the shooting of Legation Councillor Ernst vom Rath in the German embassy in Paris on 7 November 1938 by a young Polish Jew, German newspapers reported the attack as the work of ‘world Jewry’. ‘Retaliatory raids’ on synagogues and Jewish schools, homes, and shops ensued across Germany. This violence intensified in the following days, as news spread of Ernst vom Rath’s subsequent death and NSDAP leaders allowed ‘displays of outrage’ to proceed. In most cases, the perpetrators of the anti-Jewish violence were members of the SA, NSDAP, or Hitler Youth. The November pogroms marked a shift in the collective consciousness of Jews regarding life under the Nazi regime and led to intensified emigration efforts.

The November pogroms are described here in eyewitness accounts written by Jewish victims and non-Jewish German bystanders. The selected documents also offer an unfiltered look at how Nazi leaders and media construed the pogroms.